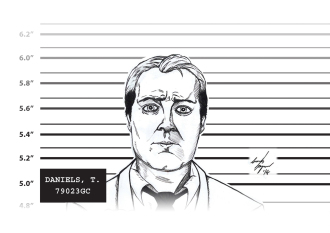 Removed and Destroyed by Matthew Gabrielli

One day in a country in the not too distant future, a man called Ted Daniels loses his briefcase and is subsequently arrested for terrorism. Removed and Destroyed is the debut play from Matthew Gabrielli, a black comedy which follows Ted into the grotesque world without human rights, we met Fleming and Buchanan two mysterious officers of the law and the absurd logic they use to justify torture. But things are about to get much worse when Ted’s past is revealed.

"An outstanding play. I really do recommend those who haven't seen it to go." Remote Goat
"Director Karl Barnsley should be applauded for bringing out the best from this very stimulating and pertinent script." The Public Review